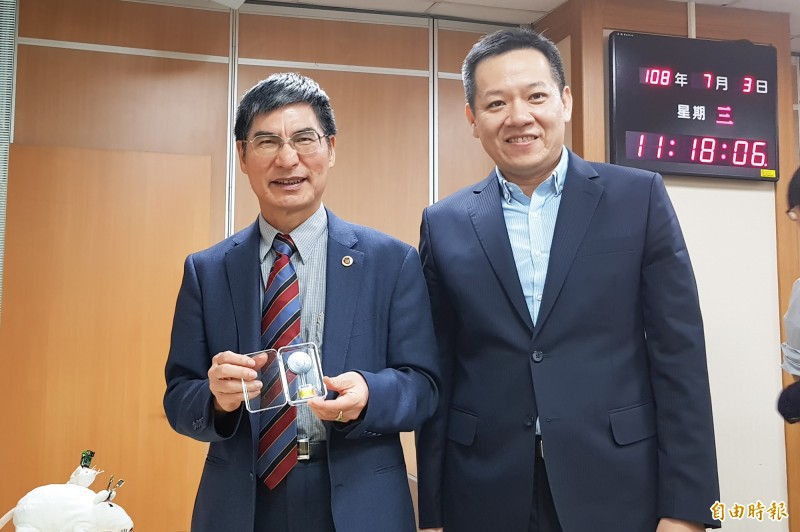 A group led by Prof. Hsin Chen, Institute of Electronics Engineering, NTHU, successfully developed a micro wireless chip which could apply on medical research of Parkinson’s disease,   dementia, and depression. It could not only record nerve activity, stimulate nerves, but also wirelessly transmit data and power. The chip control system can also automatically learn the interpretation of the abnormal neural activities of the brain, adjust the value and frequency of the stimulation, and achieve personalized precision medical treatment.

Prof. Chen said, the original treatment of Parkinson's disease requires putting the battery into the chest and then electrically stimulating the specific brain area. But the size of the battery is about half a fist, which makes the operation time-consuming and too intrusive during implantation. Moreover, the battery needs charging, when the battery reaches the end of its life, the patient has to undergo a second invasive surgery, which double the patient's risk.

Prof. Chen indicated that the chip developed by their group could demonstrate deep brain stimulation by simply having the corresponded coil implanted under the scalp of the brain and connecting the micro-electrodes implanted in a specific position in the brain. It uses wireless charging and wireless data transmission, which prevent the second invasive surgery.

Prof. Chen pointed out that the conventional treatments will continue to stimulate the brain, which may induce side effects, such as interference with memory, cognition and sleep. But their chip system could achieve closed-loop stimulation, only triggered when the abnormal nerve signal is detected. With the in vitro diagnosis and treat controller, the artificial intelligence algorithm can be executed in real time. Predicting the neural signal of the next 500 milliseconds in the first 144 milliseconds. Then it could further complete the automatic detection and triggers the stimulation when the brain wave is abnormal.

The chip developed by Prof. Chen’s team is only 0.5 cm in length and width. The traditional battery length is about 5 cm and 3 cm. Prof. Chen said that the chip-based stimulation system is currently being developed around the world, but only they can do so small at present. This technology cooperated with BioPro Scientific in May this year to develop the intelligent wireless neuro-regulator of the birth monitor, and won the 2019 Taipei COMPUTEX Innovation Design Award. It is expected to enter the animal experiment stage this year.

The research of Prof. Chih Chen from department of Materials Science and Engineering, NCTU, developed nanotwinned copper wires. Prof. Chih Chen said that in the future, AI chips need copper wires with higher strength and toughness for packaging. The nanotwinned copper plating additive co-developed by Chemleader Corporation can successfully control the microstructure of the electroplated copper wire. The strength could reach the same level as that of the steel, and the lifespan under electrifying is 4 to 10 times longer than that of the general market additive copper wire.

Prof. Chih Chen pointed out that, in the past, additives could only be purchased abroad. They developed the first indigenously additives. And the material structure of the nanotwinned copper was never developed in the world before. It has high thermal stability and high toughness, and can withstand temperatures of 250 degrees Celsius for 3 hours. It has now under mass production, and MediaTek has joined the cooperation.